Kafka Sprints Through May Day Full Of Many Thoughts 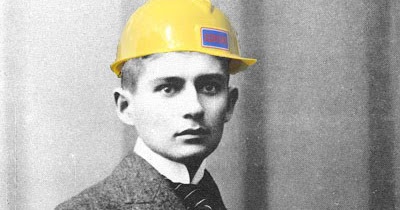 Excerpt from my Kafka In The Castle, where I fill in all of his missing diary entries. Here he is dealing with a time twenty-eight years after the first May Day was declared. Kafka dealt with workers every day of his work life. But he didn’t take their problems home.

By the way – in real life – Kafka is credited with inventing the the hard hat.

Ottla managed to get away, and I’ll be able to visit. The dead man next door (I have since found his name was Adolf) also managed to get out of Prague. Him, I can not visit, but I can follow.

The thoughts of the living discourage the dead. I spend so much time watching over myself, that there is no one left to watch over me.

I write to Ottla. I make no mention of her terminated neighbour. I do say “hello” from father. Not an uneven balance.

If Shakespeare were alive today, and people pestered him about Hamlet, would he wonder what all the fuss was about?