A Birthday Day A Century Apart Via Kafka And Me 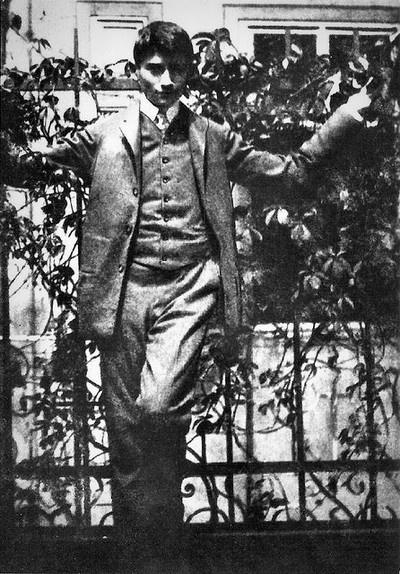 When I wrote my novel, Kafka In The Castle, filling in all of Kafka’s missing diary entries, I discovered something  interesting a few months into it. The day/month/year I was writing about, mirrored the day/month/year in which I was actually doing the writing.

For example, if the third of July was a Friday in my year, it was also Friday, 03 July in 1917. It was quite an exciting surprise, and made (I think) for more immediate writing.

Alas, my own birthday of 19 September was already filled in by Kafka, and I had nothing to do.

The following is Kafka’s actual entry for 19 September, 1917.

Instead of telegram: “Very welcome station Michelob is excellent Franz Ottla” I wrote a farewell letter, and once again strongly oppressed agonies.

Farewell letter however, is ambiguous, as my opinion.

It is the age of the wound, more than its depth and proliferation, which constitutes its painfulness.

To be torn up again and again in the same wound canal, the countless wound operated again treated.

The fragile moody void essence – a telegram swaying, a letter directs it, animated it, the silence after the letter makes it dull.

The game of the cat with the goats. The goats are similar: Polish Jews, Uncle Siegfried, Ernst Weiß, Irma

Various but similar strict inaccessibility of the creator Hermann (who has now gone away without a supper and salutation, the question is whether he will come tomorrow), of Fraulein, the Marenka.

Basically, they are oppressed on the other side, as in front of the animals in the stable, when they are asked for something and they follow astonishingly.

The case is only more difficult here, because they seem so often accessible and quite understandable.

It is always inconceivable to me that almost anyone who can write is able to objectify the pain in pain.

For example, in misfortune, perhaps with the burning misfortune, and to tell someone in writing: I am unhappy.

Yes, I can go beyond it, and in various pranks, depending on the gift, which seems to have nothing to do with the misfortune, simply or antithetically, or with whole orchestras of associations.

And it is not a lie at all, and does not nurture the pain; it is simply a graceful excess of the forces at a moment when the pain has visibly exhausted all my powers to the ground of my being, which he scrapes. What is the surplus?

From: Kafka In The Castle

The date of my birth. Thirty-four years ago in a month I now dread because of the heat. I’m not much for stock-taking (thus certainly not much my father’s son.) What has been done can’t be changed, so thoughts about it are wasted effort. Lessons to be learned – that’s all. But the dreaded “future” – this is the battlefield. I’m convinced the bulk of my life is over, and any work to be done should not be delayed. Perhaps this is why I abandon things, so anxious am I to get on to the new.

In celebration of today, I did not make it my last.

birthday, Kafka, Kafka In The Castle