The Elephant In The Storm 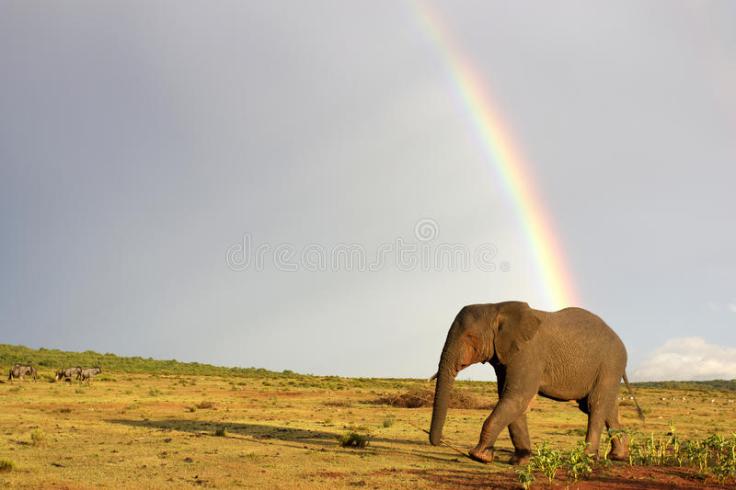 From: The Elephant Talks To God

The elephant was lost to the wind.

He stood foursquare against the tumult, head lowered as if ready to charge. It wrapped his body in its flags and banners, and then as quickly ripped them away. He had to close his eyes in some of the gusts, and occasionally his tail stuck straight out behind.     Many of the other animals found shelter, and even the monkeys came down to the lower branches of their trees. But the elephant flapped his ears in ecstasy as the wind battered against him, and trumpeted as loudly as the rowdydow would permit.

“I hear you,” said a frolicking cloud, as it whipped past his head. It turned a somersault back over the elephant’s back, and positioned itself with much dexterity in the elephant’s line of vision. “And I hazard the guess I’m the only one who can.”

“Now, now. You’ve tried that before.”

“But I’m staying on the ground, this time.”

“It certainly isn’t,” agreed the elephant, who then attempted to nod his head in agreement. But the wind took a particular bend, and not only could he not nod his head, but his trunk got thrown back into his face, hitting him in the eye.

“And is that what you’re going to tell me,” shouted the elephant over the roar.

“You’re a reckless God, then?” asked the elephant.

“And sometimes both,” suggested the elephant.

“But to you,” protested the elephant. “It is all so simple.”

“But …” The cloud sounded perplexed. “It is as simple as it sounds. Everything is everything. What you seem to do is pay too much attention to the individual parts. Concentrate on the whole.”

“I can hardly think of everything when I’m in the middle of this.”

And the elephant watched the cloud tumble around his head, and bounce against his back, and twist around his tail.

And the elephant laughed, and laughed so loud that it broke through even the racing wind, and made the other animals peek from their shelters to watch.