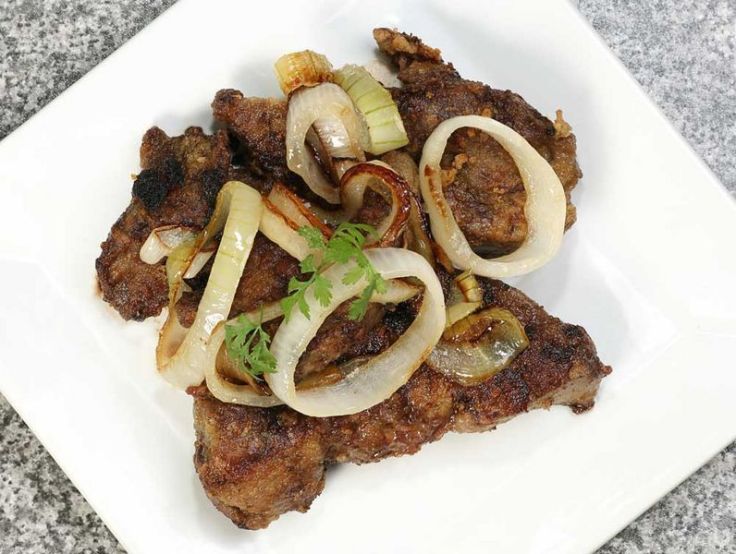 As I wend my way through my second Onion novel, China Lily, which is taking too, too, long to put into the computer, I approach page 300. The end is in sight.

My intent was to write a trilogy that followed a Fourth Century Italian farm family, as it developed into an International business empire. There was to be 1,000 years between the first and second book, and the third book was to be set in the present day.

I confess, my interest might not be sustained for the third novel.

However, as I soon describe this recipe – and its creation – in detail, I thought it might make someone a nice supper.

Fittingly, this recipe is from Harry’s Bar, in Venice.

When we visited Venice, we asked the locals where to find the definitive calf’s liver and onions. Everyone said Harry’s Bar, and, after trying it there—and lots of other places—we had to agree. This is Harry’s recipe.

Find this recipe in our cookbook, SAVEUR: Italian Comfort Food

Cut liver lengthwise into 4 long pieces, then, using a very sharp knife and pressing the palm of your hand firmly against the meat, slice each piece crosswise into pieces as thin as possible.
Heat 4 tbsp. of the olive oil in a large skillet over medium heat. Add onions and cook, stirring frequently, until soft and deep golden brown, about 20 minutes.
Transfer onions with a slotted spoon to a bowl and set aside.
Increase heat to medium-high and add remaining 2 tbsp. oil. When oil is sizzling hot, add liver and cook, in batches to avoid overcrowding the skillet, stirring constantly with a wooden spoon, until brown and crispy on the edges, 3-5 minutes. Season liberally with salt and pepper, then add reserved onions and accumulated juices. Cook for 2 minutes, stirring and turning liver and onions constantly while shaking skillet over heat. Transfer to a heated serving platter.
Add butter to skillet and scrape up any brown bits stuck to bottom of skillet as butter melts. Remove skillet from heat and stir in parsley. Spoon butter and parsley over liver and onions. Serve with Grilled Polenta, if you like.