Kafka Is Nudged Toward Love By His Sister 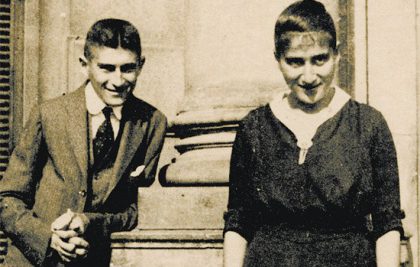 Kafka and his sister, Ottla

In my manuscript, Kafka In The Castle, I fill in his missing diary entries. In his real diaries, Kafka mentions this young lady a number of times. I make assumptions.

I think it possible the women conspire unbeknownst to themselves.

It was Ottla’s suggestion that I walk Fraulein G home after dinner. She stayed well into the evening. She was good company and we all enjoyed ourselves. We even read to each other – I selected some work by Max. He will get double pleasure from that, as he likes to entertain the young ladies himself.

She helped Ottla with the dishes, and some other clearing chores. Ottla then produced a bottle of schnapps – something I didn’t even know was in the house. I thought it possible Fraulein G had brought it (I’ve found she is capable of such a forward gesture) but I also noted it was the type which father prefers, so perhaps Ottla brought it from Prague. (And perhaps father will be recounting his stock with some confusion.)

Ottla encouraged the consumption of a couple of small glasses. I will not tell Max that the appreciation of his writings was enhanced accordingly.

As I walked Fraulein G home, I could not shake the feeling that something was expected of me. Something more than my company along the darkened road.

Was I to take her arm, or her hand, or even put my arm about her waist? I felt an element of encouragement for some such action, yet wondered where such a thing might lead.

Further, perhaps, than just the door of her house.

But, as the wind was lively, I chose to take her hand, and she then chose to walk closely by my side.

And the lips which murmured “Thank you” at her gate, and chose to brush my own, no longer called me “Herr Doktor”.