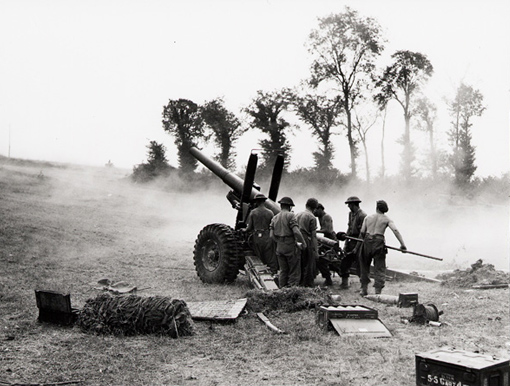 My father, Bombardier Byron C Estey, Service Number G4094 Units: 1st Anti Tank Regiment: 90th Anti-Tank Battery was on the crew of an anti-tank gun, similar to the one shown above. His job was to plot  the trajectory of the shells, so perhaps he would have stood in the same position as the fellow closest to the camera. The photo is taken during the Italian campaign in 1943, so my father was in the area.

Dad talked about the war, but rarely about the bad parts. He was full of amusing antidotes and descriptions and the tales of how people would act. He met my mother in England and it was love at first sight. He rarely neglected to add that he met her “…while searching for the ruins.” Those ruins were Hadrian’s Wall and my mother was also visiting them – with her boyfriend. So it goes.

My father was stationed in England for nearly three years. Canadian soldiers were positioned around London in case of a German invasion. Though such orders were never directly given, it was understood that the Canadians would ‘take no prisoners’ in the event of an invasion. My father had no problem with that.

He landed for the Invasion of Sicily and fought up through Italy. He was in what is classed as one of the bloodiest battles Canadian forces encountered, The Battle Of Ortona, called “The Italian Stalingrad”.  He spoke little about these eight days, which included Christmas amongst the blood.

Dad was never wounded (though he once stood up in his slit trench to see what the “funny noises” were and had his battle tunic shredded with shrapnel). He also contracted malaria, and the day the hospital tent was sweltering and he dragged his mattress beneath a tree, two doctors stood over him. They thought him unconscious and debated his condition. There was a new medicine for malaria and they discussed whether Dad was too near death to waste it on him. Since I am writing these words you may conclude they decided in favour.

I regret not talking more about the war with him, though he did not welcome such intrusion. I did once ask how close he actually got to German soldiers. He said: “Close enough to kill them.”