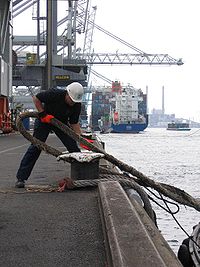 Alison Alexandra, the main character in my current Work in Progress, is about to set out on a sea cruise. She wishes nothing as boring as a Cruise Ship, so she is going on a freighter that has room for twelve passengers. She gets accommodations as comfortable as the ship’s officers, plus decent food and some entertainments. The drawback – which she does not consider a drawback – is that she goes where the freighter goes as it drops off and picks up cargo. Not necessarily fancy ports of call.

Alison Alexandra has just spent my week of writing watching the business on the dock as the freighter gets ready to cast off. For this scene I have stolen (and greatly altered) an incident that happened to me. I hear that’s what authors do, but it seems a rare situation for me.

I previously described what happened to me those many years ago, and do so again. Alison Alexandra is actually watching a crewman named Ellerton do what I did, when I stopped a submarine from running amok.

Harrison Ford And Me

In 2001/02 the movie, WIDOWMAKER K-19, was made, much of it filmed in Halifax harbour and out on the nearby ocean. It deals with submarines and an in-ship disaster, staring Harrison Ford and Liam Neeson.

I was not aware of this when I visited Halifax. I went down to the waterfront and went along the boardwalk. It was very foggy on the water (which it can be without having much on land). I was exceedingly surprised to see, looming out of the fog, a submarine next to the wharf. There are submarines in Halifax, but they are berthed at the naval dockyard a couple of kilometers from where I was walking.

It took a couple of minutes to realize that it was not a naval submarine (no markings). What was happening was that the submarine was being turned by a couple of tugboats. I read later that each side of the same submarine was altered differently so, in close ups and aerial footage, it could appear to be two different submarines.

However, there quickly appeared to be a problem. From the shouts and gesticulations of a man on the wharf, I found out that one of the mooring lines had not been cast from the wharf. The submarine was being pulled away from the dock, but it was still attached. It was a gigantic and thick mooring line, and I do not know what damage would have been done to either ship or dock.

The man was yelling to another man on the deck of the sub, who had a bullhorn and in turn was bellowing to the crew of the tug boat. However, nothing was heard over the roar of the engines (tugboats have powerful engines). The man on the wharf was trying to lift the mooring line from its post before it got too taut to move. I ran over and helped him, and we managed to get it from the post just as it started to be pulled into the water.

Of course I watched the movie credits closely, but I was not mentioned.

No famous movie actors were involved in this incident.