Kafka Was Not Tortured, Sex-Starved Or Crazy 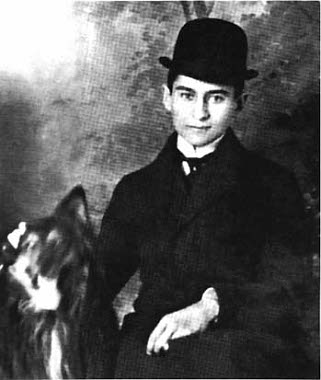 When Kafka gave readings of his work, he left the audience rolling in the aisles from laughter. He was a polite and considerate fellow, concerned about the people around him. People enjoyed his company. Children adored him.

Reiner Stach has written the most recent – and, it can be safely said – the most definitive biography of Franz Kafka. All three volumes. And he has detailed the life and work of the man, the trials and the dark outlook, the insistent search and recording of the truth that would disturb anyone’s peace of mind. But – almost, it seems, to his surprise – Stach also encountered numerous occasions and writings that show a man far more balanced than most give Kafka credit for. He has collected them in their own book, Is That Kafka? 99 Finds. The book is to be released in an English translation 21 March 2016.

The Nation has printed two excerpts of the book, which I happily include. They show both Kafka’s keen observational eye (he did, after all, write the very first newspaper article describing aeroplanes at an air show he attended) and also his humour. Why, I’m looking at my desk right now.

Who Was Kafka?
A collection of ephemera complicates the picture of Franz Kafka as a tortured neurotic.
By Reiner Stach
Yesterday 10:32 am

In the course of researching his acclaimed three-volume biography of Franz Kafka, Reiner Stach discovered numerous curiosities and idiosyncrasies about the writer that, taken together, complicate the image of Kafka as a tortured neurotic. He loved beer and slapstick. He undertook a fitness regime popularized by a Dutch exercise guru. He tried to cheat on his high-school exams. He used his desk as a metaphor for self-parody and waxed lyrical about the Paris metro. Stach details some of these oddities in Is That Kafka? 99 Finds, first published in Germany in 2012 and forthcoming from New Directions on March 21 in a translation from the German by Kurt Beals. The following two finds are reprinted with the permission of the publisher.
Kafka Takes the Subway

The Metro seemed very empty to me back then, particularly if I compare it to my trip to the races, when I was sick and alone. Even apart from the emptiness, the metro’s appearance showed the influence of a Sunday. The dark steel color of the walls dominated. The work of the conductors, shoving the doors of the cars open and shut and swinging themselves in and out, was in keeping with the spirit of a Sunday afternoon. People walked slowly along each long correspondence (i.e. transfer). The unnatural indifference of the passengers, their acceptance of this travel by Metro, became clearer. The way that people turned toward the glass doors, that individuals disembarked at unknown stations far from the opera, appeared capricious. Despite the elec. light, changes in the daylight are clearly visible in the stations, particularly when you have just gone down, particularly this afternoon light, just before dusk. Entering into the empty terminal station, Porte Dauphine, a mass of pipes comes into view, a glance into the loop where the trains are allowed to travel in a single curve after such a long, straight trip. It is much more unpleasant to go through a tunnel in a railway train, in the Metro there is no trace of that oppression that the passenger feels beneath the mass of the mountain (even if it is held in check). You also aren’t far from people, it is a city facility, e.g., like the water in the pipes. Leaping backward when disembarking, then moving forward again, all the more forcefully. This disembarking on the same level. Small offices with a telephone and a bell apparatus, usually empty, direct the operation. Max likes to look in. The noise of the Metro was terrible when I took it for the first time in my life, from Montmartre to the grand boulevards. Aside from that it isn’t bad, rather it even intensifies the pleasant, calm feeling of speed. The advertisement for Dubonnet is very well-suited to being read, expected, and observed by sad and unoccupied passengers. Elimination of language from commerce, since one does not have to speak when paying, or when getting on or off. Because it is so easy to understand, the Metro offers the best opportunity for an eager, weakly foreigner to assure himself that he has quickly and correctly made his way into the very essence of Paris on his first try. Foreigners can be recognized by the fact that they are already lost by the time they reach the topmost landing of the Metro stairs, they do not exit the Metro and seamlessly lose themselves in the life of the street like Parisians. And upon exiting, reality only slowly begins to correspond to the map, since, if we had come on foot or by hired car, we never would have made it to this square onto which we just emerged without the guidance of the map

Now I’ve taken a closer look at my desk and realized that nothing good can be produced on it.