A Blue Jay Goes To Sleep Outside My Window 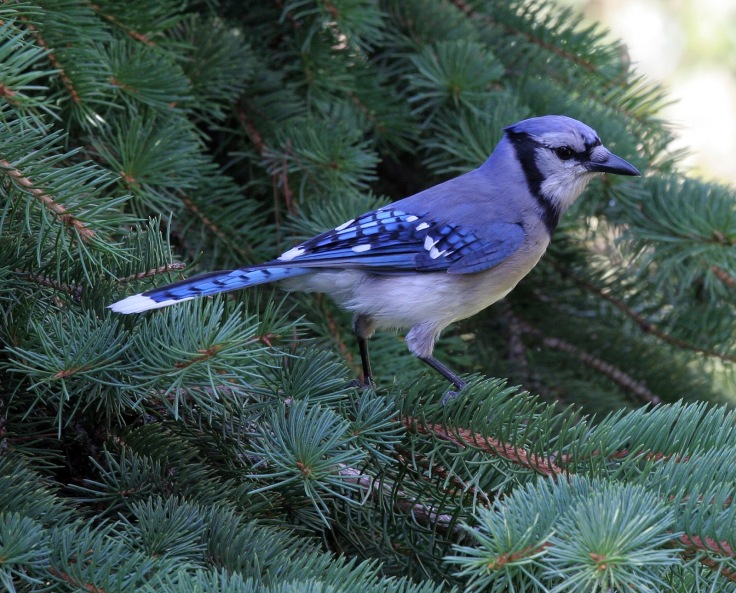 In the dusk, a blue jay has gone hop … hop … hop, from one branch of the fir tree to another, right up to my window. And he has perched there, looking in for the past four minutes. I whisper “hello”

The blue jay has been there twenty-five minutes. I thought it might have gone to sleep, but it just shifted, and then pecked at some tree needles. I doubt I have ever seen a sleeping bird.

Two crows just flew over, making their crow sounds. Woke up the blue jay, who paid attention. But then, as far as I can tell, the blue jay went back to sleep.

A window is a quarter open, a fan is on, and I’m watching NCIS (with the sound lower than usual). Yet the blue jay seems to sleep on. I might not be able to see it when it becomes totally dark.

Well, it is now too dark to see the blue jay asleep on the branch – just the barest silhouette. I’m guessing the blue jay will be gone before I awake. But I’ll look.

These were my twitter feeds until half past midnight, when I went to bed. I turned off the lights, and would not turn them on again in case the change would wake up the blue jay. The following were scrawled in the dark, except for the street light coming in the window. The time checks are from the alarm clock.
12:30 There is now some rain, though not heavy. The blue jay sleeps on.
4:45  The blue jay is still asleep. The wind is strong enough to make the branch sway.
5:15  There are some distant bird calls, which are answered within five minutes. The blue jay sleeps.
5:25 There is some pre-sunrise light from the east. It is green. There are now a number of birds chirping in the distance. No movement from the blue jay.
5:50 There is enough light from the windows to read my hand-writing. The blue jay is gone. It slept the night one meter (three feet) from my window.
(image)4.bp.blogspot.com/-hBaC-comxFA/UCEpdJmcg4I/AAAAAAAAA64/pyW3DTw-aLM/s1600/A_Proud_Blue_Jay.jpg