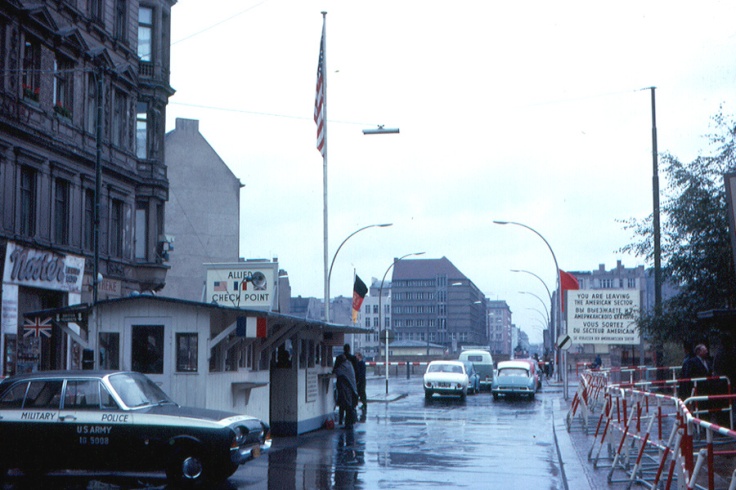 I first visited Europe years before the Euro was the accepted coin of the realm. In fact, there were many coins of many realms, and all that money caused a fuss.

I kept a daily diary of this trip, and plan to make it a part of any memoirs I might write. So I’ve hauled it out and will make some blogs from it. But they will be greatly abridged.

Around ten o’clock I set out for Checkpoint Charlie. I say that I set out for Checkpoint Charlie, but i would be less than truthful if I stated I got there easily. In fact, I threw my destiny into the hands of Fate to get there at all. For the first time I did what I understand is a favourite pass time of tourists, I executed a complete circle and returned to the Hostel. At least I wasn’t lost.

I set out again, knowing I was to go past a particular building, and also go through a large field. Surprisingly enough,  after a ten minute walk, I unexpectedly came to Checkpoint Charlie. And there were the people from the group I was travelling with, who shuffled me into their midst and thus near the front of the line.

Going past the British soldiers was a matter of seconds. You gave your name and the time you expected to return and that was it. Then told you were not allowed to take any photos, you headed to the East German barrier. Here they took your passport; you filled in forms; you had to exchange some of your money for East German money (which you had to spend in the East); got little slips of paper stuck into your passport; walked to a further barrier where you again showed your passport, and then the next thing you were doing was walking in East Berlin.

What I had expected of East Berlin was a dark, grey, dirty city, with haggard, suspicious-looking people in 1950’s clothing slinking along the streets with large bundles in their hands. I actually saw little difference in the people, or the place, than what I had seen in West Berlin.

Yes, it was more run-down looking, and there were more ruined buildings, and even buildings that were war-scarred, but it was clean and neat, and the people were like anyone else, though there were far fewer on the streets.

[More to come another day]