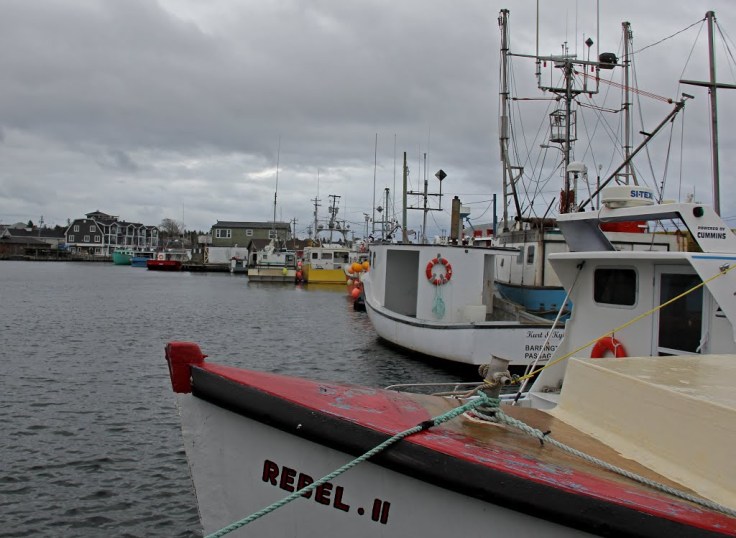 I visit wharves and gaze out to sea.

It is a pleasure that took hold some ten years ago. I don’t know why, for I certainly had experience with oceans and coast long before that. For some things it seems its time just comes.

I prefer small working ports, gritty and smelling of fish and lobster and ocean. The scurry and comings and goings (though I also like them in the evening when most work is done). I walk the docking between the boats and peer from the end of the wharf. I ponder distant shores or endless sea and screaming gulls with sometimes seals and whales and archaic Blue Herons.

Last night, when I thought the wharf was my own, a man, woman, toddler and dog arrived. They seemed to do much as I was doing, though they knew the owner of one of the fishing boats. The man was gruffly talkative, the dog was rambunctious, the woman apologized for the toddler’s dirty face and the little girl didn’t quite know what to make of me. Friendly and chatty but she wouldn’t take my hand as I offered to walk her up a gangplank.

I left them on the docking between the moored boats and started to walk on the wharf itself.  The fishing boats and the docking were parallel to the wharf.  I was half way along when I heard a shout. I heard the dog. I looked over and this is where life becomes art becomes life. It was a Kodak moment. It was a Motorola moment. It was a ‘freeze frame/real time/fast forward’ moment. It was a composition/edited moment. It was all these things which came to my visual mind. All this and the knowledge that there was no way I could get there if I was needed.

The little girl was going for the gold. She had God in her feet and Angels in her streaming hair as she raced between the moored boats. Her dirty face was wide with excitement and it is probably the happiest she has been in her life. The man was restraining the dog and the woman was in athletic pursuit. They raced between the boats and the mooring lines and the tools of the fishing trade. The dock swayed in the movement of the waves.  I could not believe the swiftness of the child. The woman finally took what seemed to me a runner’s stance and eventually grabbed the exuberant child. I heard, over the water, admonishments of what could happen if she had “gone under a boat.” All – of course – true.

But the dog understood.