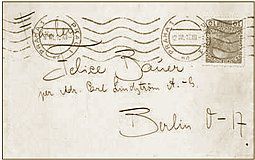 It was an exciting surprise, and made (I think) for more immediate writing.

When Kafka became so ill he he took leave from his employment, he stayed with his sister Ottla in a village, hours from Prague. The following recounts the visit of his fiance,Felice.

The trials of Felice. The trials of Franz. As they are put together in this obscure little village – with animals and harvest and the clatter of waggons without.

Because of the war, her train journey an ordeal of thirty hours. Only to reach this destination. This lover who doesn’t … “even have the grace to love another.”

That is something F. can understand.

The two days Felice spent here a trial of misery. A trail of misery. Even – I suspect – when she slept.

It is fortunate that I am ill, for it lets her see me in life, the way I am in spirit. The`me’ she would have to fight against. The `me’ which is always opposed to her.

We shared quiet meals, grateful and annoyed by Ottla’s constant chatter. As good a hostess as possible to this strange, sullen couple.

Ottla must have been thankful that her chores took her away as often as they did. I had no such excuses, yet could offer nothing in their place.

F. and I were truly left to each other, and any thoughts she might still have about us getting married must surely be removed.

When we did talk, it was about the change in seasons, the harvest (she took an interest), her work in Berlin. About my health when I seemed to tire (my weariness not all caused by being sick).

We rarely held hands on our walks – just briefly, in the minutes as we returned.

The few kisses were perfunctory.

Not even for memories of things past.