When A Lighted Cross Saw Me Through The Night 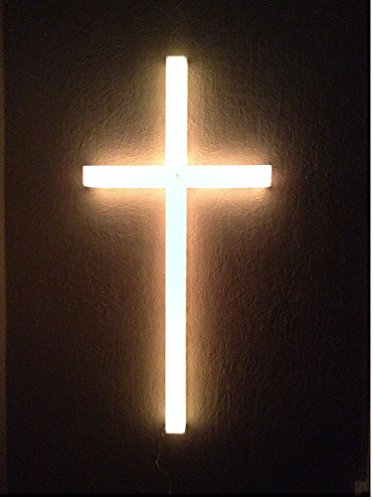 It has been my odd experience to have twice lived across the street from a huge, lighted Cross.
The first appeared to be the height of three men standing on each others shoulders. It was across a wide field and a road, from where I used to house-sit a number of occasions over the years..It was in the yard of a private dwelling, and was (so I was told) a memorial to a relative who had died in a mine disaster.

When the sun went down, it came on. Whether someone in the house turned it on, or light sensors on the edifice gauged the amount of darkness, I do not know. The street was a dead end street, so there was not a lot of traffic. However, if I so chose, I could get the full benefit of it. It shone brightly for hours onto the front of the house. And into the house if one was in one of the front rooms or bedrooms. It had a blue hue, and an unrelenting vibrancy that made one eventually think of neon. I didn’t so much think of spirituality or practicality, but did wonder at the waste.of money and resources for – let’s be honest – so little effect. I also (somewhat uncharitably) assumed that the cross did not shine forth from both sides, and the folk in the house behind it were not affected.

Then, years later, I found myself in another house, across another street, from a giant cross left alight all night. This cross did not shine directly into the house, but slanted more along the street, and not across it. It is affixed by mighty metal stanchions and stays atop a huge Evangelical church. When darkness comes, its emblazoned light can be seen across a whole city and, by my reckoning, into the hills beyond. I am not certain, but I also imagine it can be seen by ships at sea.

But, both crosses bestow upon me the light of the Lord, and I’ll happily take whatever blessings might be granted.