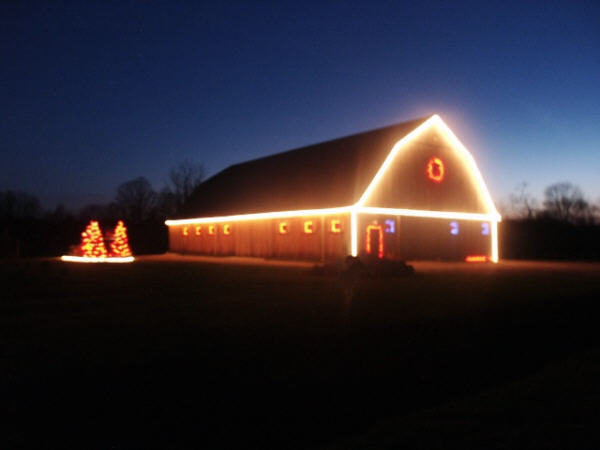 I am not, and have not been for decades, a great fan of Christmas. It is more of a chore than a snore. But I don’t blame Jesus.
However, as I wended my way westward for the season, I was given a Christmas gift I would never have expressed that I wanted. It was a rustic blend of the old times and the old ways, which I’m led to believe is – in great part – what Christmas is all about.
For part of the trip, the bus took the *old* route. I imagine I had not been along that stretch of rural road for a quarter of a century. I later queried the driver about this change in the usual way. I was told that, at this holiday time of year and night, traffic on the major highway in and out of the city was massive. The roads avoiding the main highway were a time-saver.
It was a back, country road, after dark, single lane in both directions. Many of the country, rural, and village houses were alight  with Christmas decorations. Poor and rich alike. External and internal Christmas trees, with multi-coloured lights, or of a solid hue. Flashing, twinkling, changing colour, or one solid block of light.
The outside lights were festooned on everything. In addition to trees, they outlined windows, eves and chimneys. They were strung on shrubs, bushes and hedges. They adorned mailboxes, carts, rows of chopped wood, outbuildings and barns. There were a couple of waggons and one vintage automobile with their own outline of Christmas lights.
In addition to the festive additions, just being on the back roads was a memory adventure. There was no (admittedly efficient, but boring) straight highway with, across a grass verge, two streams of vehicles going in the other direction. No uniform band of trees across the uniform ditch to the side. No seemingly endless Endless.
No, this road had dips, and hills, and curves. You could see if a car was approaching by noting their lights shining on the telephone wires (I had forgotten that). There were wrought-iron bridges going over streams and small rivers, that rattled and rumbled as the heavy bus crossed them. There were pastures without their cows, vistas to darkened hills beyond, and actual forest where wild animals prepared for their sleep.
It took me back to my distant youth, it did. I do so enjoy driving at night (as long as I’m not the driver).
See – it’s already a Merry Christmas.
(image)https://www.farmanddairy.com/wp-content/uploads/2014/12/Grand-River-Valley.jpg
Advertisement