Valentine’s Day And Kafka And Love 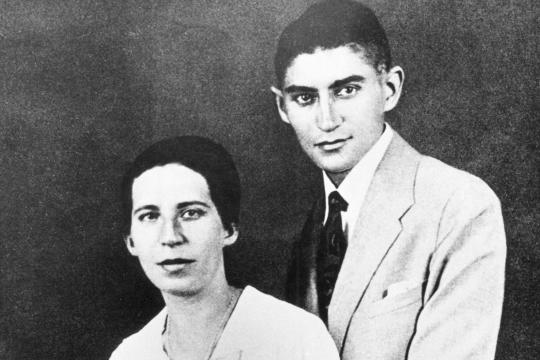 (Kafka and his fiancée, Felice)

Contrary to popular belief, Kafka had a very full love life. He was rarely without a lady friend during any part of his life. When one left, another soon took her place.

This is a part of a letter he wrote to Felice, the woman he was engaged to – twice. I think it fair to say that she was long-suffering. I would think that the sentiments Kafka expresses might have given her second thoughts. Perhaps that is partly why there were two engagements.

Think what one will about Kafka’s romantic abilities, he was a chick magnet. Right to the end. After his funeral his last lover had to be restrained from leaping into his grave to be with him.

I am now going to ask you a favor which sounds quite crazy, and which I should regard as such, were I the one to receive the letter. It is also the very greatest test that even the kindest person could be put to. Well, this is it:

Write to me only once a week, so that your letter arrives on Sunday — for I cannot endure your daily letters, I am incapable of enduring them. For instance, I answer one of your letters, then lie in bed in apparent calm, but my heart beats through my entire body and is conscious only of you. I belong to you; there is really no other way of expressing it, and that is not strong enough. But for this very reason I don’t want to know what you are wearing; it confuses me so much that I cannot deal with life; and that’s why I don’t want to know that you are fond of me. If I did, how could I, fool that I am, go on sitting in my office, or here at home, instead of leaping onto a train with my eyes shut and opening them only when I am with you?  … Franz

While in the first year of his ‘love-of-a-lifetime’ affair with Felice Bauer,  he met “The Swiss Girl”. In his diaries she was only referred to as W. or G. W. They were together for ten days in a spa on Lake Garda.

She was a Christian. He was thirty, and she was eighteen. However the relationship (apparently sexually consummated) made a great impression on him for the rest of his life.

Research over the years  finally revealed who she is, and Google search even provides photos. Her name is Gerti Wastner.However, very little else (as far as I can find) is known about her.

Where did her life lead after an encounter with Kafka?

Here are some of Kafka’s actual diary entries about the incident.

I would gladly write fairy tales (why do I hate the word so?) that could please W. and that she might sometimes keep under  the table at meals, read between courses, and blush f

Too late. The sweetness of sorrow and of love. To be smiled at by her in the boat. That was most beautiful of all. Always only the desire to die and the not-yet-yielding; this alone is love.

And in the spirit of Valentine’s Day and Kafka, I’ll add a bit from my Kafka In The Castle

Had I not retreated, I would have given up myself. This is what is expected from love. My thoughts and emotions would be continually extracted. I have no way to replenish them, so I would eventually be hollowed out. And I would collapse.

I will meet Felice – it is what she wants. It is what must be done. She is coming to Prague, and will no doubt fit in perfectly. My parents approve of her – more, I suspect, than they approve of me. She’ll be insulted by this tiny house – it will be found wanting and crude. Some of those annoying qualities she hints about me.